The beauty of fantasy football is the wonder and excitement that builds up. It makes us feel like we’re involved and invested into something way more than we actually are.

I don’t know how many of you are also huge nerds, but Marvel is a giant part of my life. From the old comics, to me and my friends geeking out over every single Marvel movie and show that comes out every few months. Stan Lee started that.

The guy brought to life Spider-Man, the Hulk and the Fantastic Four among many others.

He gave me, and countless others, the escape, the excitement and the wonder that came with immersing yourself into a Marvel tale.

That’s what fantasy football is, it’s an outlet from the real world that lets us escape into something so exciting, heartbreaking, and wildly fun all at the same time.

Marvel and Fantasy football may be a little different, but the rush that comes with being involved with both of them is very much the same, and they both helped shape friendships, and even on a more grand scale, changed lives, including mine.

So thank you, Stan, for being the superhero who started it all.

OK, let’s get back to the picks! (That is, until the Avengers 4 trailer drops):

WHO I WOULD START: 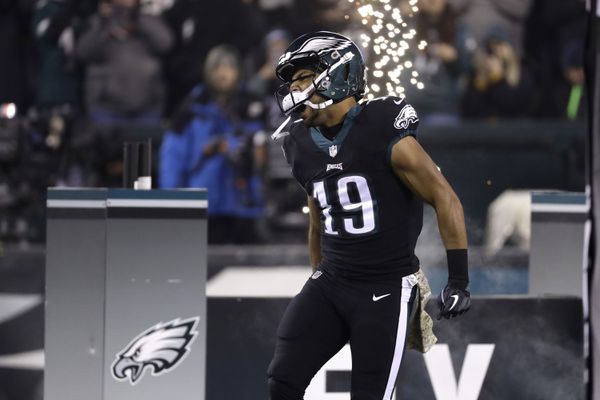 Two catches. Dos. 2. That’s IT. I understand it’s a guy coming on to a team mid season and it being a tough adjustment but he had 2 weeks, and he didn’t do much with the limited opportunity. That changes. This is it for the Eagles. It’s the SAINTS. Carson is gonna throw. A lot. Tate scores Sunday. Book it.

Tate doesn’t do anything again and the Eagles lose…again. And wow whoops there goes my sanity too.

As the Jaguars plummet back to the bottom of the league where they were so accustomed too, Moncrief continues to produce. The Steelers are up next. While they are on fire, the defense has proved a little vulnerable on the back end. Look for Moncrief to continue his solid season with another outing ending in the end zone.

If you think the Steelers are going to let the Jaguars beat them a third time in two years…LOL. Jags lose in embarrassing fashion, the BOAT gets benched and Cody Kessler does not get the ball to anybody wearing the correct jersey.

Yes. Jackson is a GAMER. If Flacco is out (if) I think the former Heisman winner puts on a show for the Ravens. I think 3 total touchdowns could be in the cards. I am a big believer in Jackson, and think he has a future as the Ravens QB.

Flacco doesn’t play…but neither does Jackson. Another certain former Heisman trophy winner plays instead and then you look at your phone at 1:03 PM EST on Sunday and realize you have made a giant mistake.

Fine, I’ll say it, I’m incredibly salty. Prescott is brutal under pressure and he roasted the Eagles on national TV at the Linc. I’m not thrilled. It doesn’t mean Prescott still doesn’t stink. I’ll take my chances off of 2 months of a quarterback camp I did in 7th grade against *checks notes* Tre Sullivan and Craven LeBlanc(?) The Falcons are at home off a bad loss to Cleveland and the ghost of the assistant to the Head Coach Hue Jackson. That’s trouble for Dallas and Dak.

Dak continues the hot streak against a very average defense and the Falcons lose, Dak shines, and I quit everything.

Anthony Miller can ball. He has come out of nowhere and been a beast for Chicago this year. I really like what they’re doing over there. However, I think he’s got a tough one against Minnesota. Minnesota hasn’t been as good as last year, but I fully expect them to give the young Bears a run for their money. I think the Vikings make it difficult for Miller and company.

The Bears finally expose the Vikings as the frauds they are once and for all, and Miller is a big reason why going for 2 touchdowns to end any hope they had at reaching the playoffs again.

I’ll be the first and I think my Dad might be the second to admit, but I whiffed big time on Derrick Henry. I thought this year was going to be his big breakout. While he does nice in spurts, I thought this was the year he was gong to be the bellcow and take over the season. There’s still time, but he just hasn’t been everything he’s been hyped up to be. While Dion Lewis took the main role, Henry is mostly a change of pace guy, look for that to continue this weekend against the Colts.

Henry finally takes over a game and helps hammer home a big divisional win against the Colts. 30 touches and another two touchdowns for the former Heisman trophy winner. Your season is ruined, and those 5.7 points from Lesean McCoy don’t help you make the playoffs at all.

The season is winding down, and it’s time to see who the real heroes and villains are this season. (One more Shoutout to the GOAT Stan Lee!) I hope you all do better than me this weekend.

See you next week!