The year may just have started but 2019 already has an exciting lineup of films on the way. From horror sequels to a plethora of superhero films, the calendar is stacked with potential blockbusters. Following 2018’s record breaking box-office year, that saw Black Panther make over $700 million domestically. Let us take a look and see the 13 most anticipated films of 2019.

After the success of The Visit and Split, M. Night Shyamalan is definitely back! Following the twist ending of Split, that directly tied the movie to Shyamalan’s cult classic, Unbreakable. In the sequel to both films, Glass, returning stars Bruce Willis, Samuel L. Jackson, and James McAvoy play mentally unstable characters with advanced abilities. 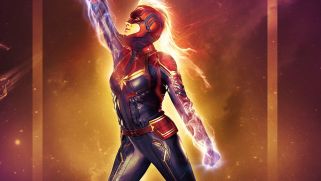 Marvel fans do not have to wait long to get their big screen superhero fix when Captain Marvel soars into theaters in March. Oscar-winning actress Brie Larson stars as Carol Danvers aka Captain Marvel, first teased in the end credit scene of Avengers: Infinity Wars. The 90s set film, that brings back Samuel L. Jackson as a young Nick Fury, is sure to be another hit for Marvel Studios and Disney.

Fans were hungry for more after getting a taste of what Jordan Peele can serve up. After winning an Oscar for his breakout debut, Get Out, Peele is back again to terrify audiences. This time bringing along Oscar winning actress Lupita Nyong’o to lead an impressive cast of Winston Duke and Emmy winner Elisabeth Moss. This movie is sure to get the hearts pounding and the blood racing in March.

With the success of Wonder Woman and now Aquaman, the DCEU may finally be on the upswing. If that is true, the success of Shazam! might already be in the cards. Starring Zachary Levi as the mythical god, tells the story of a 14 year old foster child who gains the ability to turn into the adult superhero.

After the devastating finale to Avengers: Infinity Wars, Marvel and the Russo Brothers bring us the epic conclusion of to this chapter in the profitable franchise. With the

rumored departure of some of the franchises most familiar faces, it is both saddening and exciting to see what this film will have to offer.

For years, children and adults alike have yearned for a live action movie set in the Pokemon universe. In 2019, those dreams will become reality. Ryan Reynolds will voice the titular character, Pikachu in this noir style fill based on the popular Japanese video game of the same name. Hopefully with the success of this film, audiences can expect to see the Pokemon universe evolve right before our eyes.

Following the success of 2018’s Bohemian Rhapsody, director Dexter Fletcher is set to bring another pop idol’s story to the big screen. This time tackling the life of superstar Elton John. Starring Taron Egerton as John during the highs and lows of his illustrious career. Rocketman is sure to be another hit for Fletcher.

After making most of the world ball their collective eyes out with Toy Story 3, Disney and Pixar are at in again in this fourth installment of the beloved animated franchise. Little is known of the plot, however teasers were released highlighting new characters voiced by Jordan Peele, Keegan-Michael Key, and Tony Hale.

Star Tom Holland who is known for spoiling plot points and titles for the upcoming films he is attached to has been completely silent about the sequel to the 2017 hit film. The casting of megastar Jake Gyllenhaal as Spider-Man nemesis Mysterio is more than enough to put some butts in the seats this summer.

Disney has three, yes three live-action remakes on the schedule this year. Out of all those

the most anticipated has to be Jon Favreau’s remake of The Lion King. Featuring a star-studded cast of Donald Glover (as Simba), Beyonce Knowles (as Nala), Seth Rogen (as Pumba), and a returning James Earl Jones (as Mufasa). If early reviews are correct The Lion King is sure to dazzle audiences all over again.

After the runaway success of the first installment of It. Director Andy Muschietti is back to conclude this Stephen King classic. Bill Skarsgard is back as the evil clown Pennywise now set to terrorize the kids of Derry now adults. Bringing in stars Jessica Chastain, James McAvoy, and Bill Hader, IT: Chapter 2 is sure to scare its way to number 1 come September.

DC fans have been intrigued with this film since it was first announced. Todd Phillips, director of the Hangover films brings Joaquin Phoenix to play the Clown Prince of Crime in this latest adaptation of the beloved comic book villain. If set photos and videos are anything to go off of, fans should be in for a real treat when the film hits theaters in October.

It could be argued that this is the most anticipated film of 2019. The epic conclusion to the Skywalker Saga, the as-yet-untitled Star Wars: Episode IX, brings back franchise stars Daisy Ridley, Adam Driver, and Mark Hamill to finish of this chapter of the sci-fi adventure.